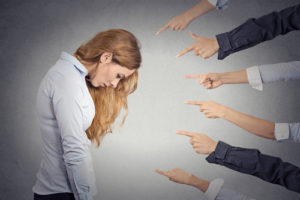 Manipulation Through Guilt and Other Thoughts

For those of you who’ve read my post Projective Processes in Relationships, you may remember the idea that some people communicate or interact with us by provoking certain feelings or reactions in us, rather than speaking directly about their own emotional experiences. In this post I’m going to hone in on this idea a bit more and speak about guilt in particular.

For example, passive aggressive people communicate their anger by doing things that make us feel angry, without directly expressing their hostility or aggression. This is convenient for them because they don’t have to take responsibility for their own aggression towards us and can always deny that they meant anything at all by their behaviors. This may also be a way of expressing anger that they don’t realize they have. Of course, this doesn’t feel that great if you’re on the receiving end of the passive aggression, because of the anger it provokes as well as the difficulty in confronting the person with the effect they’re having on the other person.

These types of provocative communications or behaviors, which evoke a reaction in us but also obscure the intent or motive at the same time, can also play games with our perceptions. We may question our view of reality, wonder if we’re overreacting, or feel guilty for being angry when it doesn’t look as if the other person intended anything hostile at all. Some people act sugary sweet while defeating or hurting us, which makes it even worse.

What can be even harder is when people around us don’t see through the manipulative behaviors in the way that we do, or even worse, when we are blamed for the reactions that the other person provokes in us. This can lead to feeling like “I must be the crazy one because everyone around me is acting as if nothing is wrong.” It can also lead to feeling like you need to suppress reactions that you don’t want to be having, but also can’t help having, such as in the case of the bully who taunts his victim and then calls him a crybaby for his show of pain. The victim, in this case, has to deal with his own pain as well as with the job of hiding or suppressing his pain in order not be further bullied for the pain itself. In this scenario, the bully is projecting out his own feelings of weakness or inferiority and then attacking the other for having those feelings.

Having to sacrifice either our sanity (i.e. perceptions) or our relational security (i.e. attachment to the other or safety from being hurt some more) creates a situation in which we can either know our truth and put ourselves at risk or suppress our truth and sacrifice the self. Sometimes the body speaks what words cannot, a compromise position that allows us a way of expressing our pain indirectly, yet without further projecting it into others. The body in this case becomes the container for what cannot be safely spoken while also interrupting the cycle of using yet another person to project one’s pain back into.

I think one of the most pernicious forms of this type of dynamic is the masochistic or martyr method of being passive aggressive or controlling the other through guilt. This is when someone “plays the victim” to manipulate the other; sometimes completely unaware that they are doing so.

Tracy was a case in point. Tracy’s mother would actively make poor choices that would put her in the position of feeling helpless or panicked. For example, she would chronically spend too much money buying shoes and clothing, and then call Tracy in a panic about not having enough funds to cover checks she had written to pay her bills.  At other times she would take on too many responsibilities and run herself down, only to then complain to Tracy about her inability to manage all the things she had to do. The implicit message was that Tracy should give her mother money or offer to take over some of her responsibilities, which Tracy very much resented. When Tracy wouldn’t offer to bail her mother out (thinking in her head that it wasn’t hear “fault” that her mother got herself in to these situations), her mother would up the ante until Tracy felt compelled to “help” out.

When Tracy would offer suggestions or advice about changes her mother could make to avoid getting herself into these constant unfortunate positions, Tracy’s mother would negate the advice, or else say she would do things differently but never follow through. When Tracy would finally explode and express frustration at her mother’s constant self-defeating behaviors, her mother would complain to Tracy’s brother about Tracy’s “coldness” to her pain and then give Tracy the cold shoulder for a while.

To make matters worse, whenever Tracy would complain to her brother about this dynamic, he could not see her perspective. He would remind Tracy that their mother had given up everything in life for the two of them, having raised them alone and putting everything in her own life permanently on hold to do so. Tracy sometimes wondered if she was crazy or ungrateful, and she did feel bad because her mother had sacrificed so much of herself for her children. Tracy also knew that if she would ever confront her mother directly about her own role in choosing or creating some of her own unhappiness, her mother would feel crushed and hurt to her core. Speaking her truth would feel like destroying her mother.

Tracy was left with little recourse in terms of how to deal with this situation. She could step out of the position as her mother’s “rescuer” and let her mother be angry with her, but that would also hurt, and she never quite knew where the line was in terms of how much it was her duty to help out as a daughter. Tracy could alternatively continue in her role as the container for her mother’s suffering, but her own anger and resentment would have nowhere to go.

Since speaking was not an option for Tracy, her anger would come out in chronic back pain that would debilitate her for days. Tracy’s body would say something that could not be said in words.

Had Tracy been able to talk with someone about her mix of resentment and guilt, and helplessness at seeing her mother’s pain, she might have been able to process her feelings and find some way of making peace with her own perceptions, as well as separating at least psychologically from the position her mother was putting her in.

My experience has been that people like Tracy, however, are afraid to talk about their resentment, even to a therapist. It seems easier to blame themselves or to question their own reactions, than to accept the aggression in the (m)other’s behaviors, as well as the ways in which they are being actively controlled and manipulated through guilt and suffering. Speaking feels like a betrayal of the mother, and in a way, this make sense. After all, the mother masks her hostility and acts as if it’s the other who is the aggressor, the one who becomes dismissive or resentful of her supposed “victimhood”, when she cannot help but suffer. And what if she really can’t see her role in all of this? Can she really be blamed?

These are questions my patients grapple with, and I try to help them break the cycle of speaking through action, through the body, or through creating reactions in the other. I encourage them to find their words and to reclaim their sanity, trust in their perceptions, and to accept the nature of the other’s role in these interactions so that they can slowly put the pieces back where they belong.

Looking for more? Check out this excerpt from my newly launched e-course:

P.S. Want a taste of how I do therapy?? Read my novel for a vicarious experience of therapy with me: