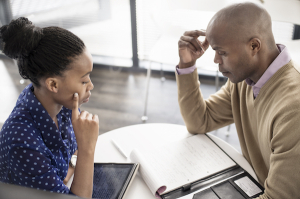 While most people can appreciate the importance of marking at least some individual boundaries within relationships, knowing how and where to “draw the line” is not always quite that simple. As a matter of fact, at times, it can take some rather sophisticated negotiation skills to figure out how to balance one’s individual needs with those of one’s relationships or the others with whom one interacts. Healthy developmental experiences with caregivers who were mindful of their own needs while simultaneously empathic about the effect of their actions and needs on others, often leads to an internal sense of security about how to allow oneself to be invested and close with others in relationships without undue fears of losing oneself in the process. Committing to relationships, admitting vulnerability, and acknowledging one’s needs and desires for closeness with others, in such cases, does not lead to feelings of being trapped, intruded on, or coerced, because the rewards of connecting with others are not felt to come at the cost of one’s right to maintain a healthy level of autonomy. For those of us who were not quite so lucky, however, interactions with caregivers who did not manage boundary issues quite so deftly may have left a mark on one’s sense of being able to manage boundaries in relationships in ways that leave all parties appropriately empowered.

John was a case in point. Having grown up with an intrusive mother who often confided in John about problems she was having with John’s father left him feeling very much caught in the middle between his parents, as well as between conflicting feelings of both wanting to connect and be close to his mother but also feeling that to do so involved relinquishing his own sense of what he was comfortable sharing with her (or having her share with him). Although John connected to others very easily in his romantic relationships, he could never manage to commit to any one partner at a time. Rather, he seemed to always be juggling multiple relationships at once, and would often split his attachment needs between two women at a time; he would use one woman for romance and the other for companionship, keeping his relationship with each woman a secret from the other. This left John with the perpetual feeling of having “one foot in and one foot out” of any given relationship at a time. It was stressful to try to manage both, keep secrets, and worry that to give up either would mean giving up an entire set of needs that he had split off from the other relationship.  In this way, John managed to recreate some of the stress he felt growing up about being caught in the middle, while also trying to protect himself from his fears of having to give up parts of himself or his own needs in order to please a woman. Ultimately, it was a poor strategy that didn’t really work that well.

Sarah also had difficulty with managing her sense of her own internal boundaries in relationships; she had grown up with an intrusive mother who often controlled her passive and submissive father. Sarah always hated the way that her father seemed to be so weak in relation to her mother and could never stand up for himself; she often wished she could get him to have more of a voice and not be so afraid. Sarah adopted a very authoritarian and rigid way of setting boundaries in relationships as a reaction to this, often asserting herself in ways that were very black and white and could even border on being bullying at times. Sarah had trouble realizing that her attempt to disidentify with her father’s passivity had led her to put her own partner in the position of having to constantly submit to her, since any compromise or giving up of her own needs in the relationship felt like a submission or sign of weakness. Sarah had become somewhat of a bully because her only model of managing self vs. other in relationships involved a polarized setup of an overbearing person controlling a weak and passive one, and she didn’t want to find herself in the passive position.

Jennifer was another client who had an entirely different strategy for managing her needs in relationships, although her’s was just as dysfunctional; she often felt that the only way she could manage to assert herself in relationships was to be passive-aggressive, acting on the surface as if she was submitting to the other while finding manipulative ways to get her own way. While many people who use manipulation to manage assertiveness difficulties in relationships are unaware of what they are doing, Jennifer was very aware of her manipulativeness- but saw no other way to have a sense of effectiveness in her relationships. She was terrified of anger and conflict because she had often witnessed domestic violence between her parents, yet she also felt very disempowered when she couldn’t seem to get others to take her needs into consideration in relationships. Jennifer felt she could have it both ways- get her way without evoking the other’s anger- when she would do things like threaten suicide, withdraw into silences, or simply act as if she had tried to do what the other wanted but wasn’t able to for reasons beyond her control. It wasn’t until Jennifer started to see that her manipulative behavior left her terrified that others would manipulate her, as well as that she could never stop being manipulative because then she would have no strategy for feeling a sense of control in relationships, that it became clear how much of a price tag accompanied this strategy.

Learning how to really listen to others as well as how to state one’s own needs clearly; being able to keep a sense of one’s own needs and desires alive even while focusing on others and on accommodating to the sharing and compromise that close relationships require; and having a sense of mutuality in relationships, are only some of the aspects of healthy boundary setting that can make the investment and commitment to relationships feel safe as well as fun! If you haven’t learned this kind of thing at home, therapy can help.

How are you doing with finding a healthy balance between the rewards and tensions involved in relating to others?