The first time I worked with a narcissistic client 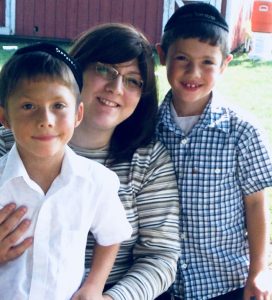 Dealing with a Narcissist- Not so Simple

It’s not really the easiest thing to be a 21-year old intern, in graduate school, in a foreign country, speaking to your very first client, in a language that is not your native one.

Especially when your client turns out to have profound narcissistic tendencies.

And when you find out that her daughter, who is being emotionally abused by her, is your client too.

But then again, not everything in life is easy, and this in fact did happen to me.

Close to 20 years ago, I was in graduate school in Israel, studying family therapy, my first internship taking place at a social service agency in Jerusalem. I had two babies at home (my sons were born 13 months apart, there they are in the picture above!), was overwhelmed trying to juggle school and home, and remember taking a taxi to the agency on my very first day.

My Hebrew at the time was passable, but not exactly polished enough for me to walk into my first day at my internship without butterflies in my stomach.

And things didn’t get much better after that, considering I was assigned my first case with about as little direction as a paper with a name and address written on it, and instructions to simply show up at the family’s door and figure out what they needed.

But I did what I was told, went to the home, and knocked on the door. A heavyset Moroccan woman invited me in, I introduced myself in broken Hebrew, and we began to talk.

The woman turned out to be a single mother, proceeded to tell me about her financial difficulties and problems with her ex, informed me that her 12 year old daughter was not home (so I’d have to meet her some other time), showed me a pot of beans and rice she had cooked, and showed me a bandage from a medical procedure she had just had.

And then the real complaints began.

They were mostly about her daughter.

It was very much a victim narrative (although at the time I didn’t think in those terms), a story of “poor me, her father doesn’t help me, he deserted me, I don’t have money, and my ungrateful, unhelpful, clumsy, ugly, uncooperative daughter makes my life miserable”.

And, of course, she expected me to be able to “fix” her daughter, to make her nicer, prettier, more helpful, more grateful, more submissive.

For one, I was shocked to hear a mother describe her child in such mean and unkind terms. Secondly, this mother seemed to genuinely believe that her daughter’s feelings (and self) did not matter at all, that the only thing that mattered was for her to be totally hostage to her mother’s desires.

This mother was completely oblivious and apathetic to the need for her to be a mother to this girl who was her very own daughter, to make her feel good about herself, to nurture her, to respect her desires as a pre-teen who wanted to be with her friends and who was struggling at school, and to empathize with the effects of not having her father in her life.  For this mother, it was simply all about her.

The next time I came to the home, I did in fact get to the meet the daughter…and was shocked when this woman proceeded to tell me, right in front of the girl, without any shame at all, how her daughter is a “lazy”, “ugly”, “fat”, and “spoiled” child.

I tried to say “stop”, to explain to this mother that she can’t say such things in front of her daughter… that these are hurtful things to say…I tried to soften this woman towards the girl and to get her to see things from her daughter’s point of view. But this only made things worse!

The more I tried to stop her, the louder, more emphatic, and more vocal this mother became about how her view of her daughter (as the monster she was making her out to be) was the only view- the correct view- and how her daughter deserved to hear the things she was saying because she (the daughter) was clearly the one with the problem.

Shaken up from the whole encounter, in my very next session with my supervisor, I told her the whole story, looking for a listening ear and some sympathy about how helpless I had felt. My supervisor was also appalled at what was going on in this home, but instead of understanding how impossible it seemed to get this mother to deescalate and see things from her daughter’s point of view, my supervisor simply insisted that next time I go to their home, I get even more emphatic and aggressive about stopping this mother from saying these things in front of her daughter, and making her understand what was wrong with what she was doing.

Now, looking back, I’m not sure how much experience this supervisor had with treating narcissistic personalities, but all I can say is that her advice did not work. And that, clearly, she did not understand that when you try to convince a narcissist that their point of view is wrong, or show them how much they’re hurting another person, it only makes things worse. An exercise in frustration and futility.

And it certainly wasn’t working for me in this case.

Frustratingly so, because my supervisor was acting like I should be able to get this woman to see her daughter’s point of view, when actually she was totally incapable of doing so!

What I didn’t know at the time is that it wasn’t I who was a failure, it was that trying to convince a narcissist out of their perspective is doomed to fail by definition.

And so I needed to learn what would work.

How you talk to a narcissist.

What you do in a case like this one.

And I did learn.

It wasn’t my supervisor who taught me, it was actually my therapist. He explained to me the way a narcissist’s personality is organized, the way in which I needed to listen to this woman, and that the only way to teach someone empathy is to give it.

What he taught me worked.

And it was a lesson for life.

Because there are narcissists all over, and sometimes they are even our very own family members.

And watching a narcissist treat a child or another person like an object, or an extension of their ego, or as someone who is deserving of name calling, criticism, or rage simply because they’re not being who the narcissist wants them to be in a given moment, is extremely painful.

It makes you feel helpless.

You want to make the narcissist stop what they’re doing, but you just don’t know how because they don’t listen, they don’t get it, and they can’t empathize with the way they’re making someone else feel when they hurt them or use them.

And even worse is when you try to step in, to explain things logically, to get the narcissist to see things from a different point of view…yet it only makes things worse.

I no longer do that though.

I don’t do things that make things worse.

When I’m dealing with a narcissist, I feel in control.

Because I know what works, I know how to calm them down, I understand what’s going on and how to say things the narcissist will take in and respond to.

I don’t panic, I don’t get all frustrated, I don’t say things over and over, trying to get a point across that the narcissist can’t hear…because I know what I’m doing. I’m in control.

And I teach this to my clients.

And I’m on a mission to teach what I’ve learned to all the people out there who want to learn it.

And that includes you…if you’re ready and you’re willing.

Here’s a blog post you can read where I spell it out for you:

P.S. I also offer an online course on this topic…Click on the link below for more information:

Dealing with a narcissistic or toxic family member