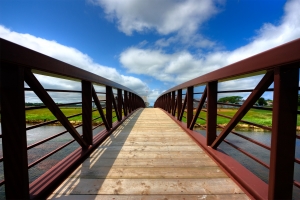 Frontier States and the Creative Process

Words like “borderline” and “schizoid” have at times gotten bad rap for their associations to things like instability, identity confusion, fear of commitment, and giving mixed messages to or avoiding those we love. Yet in-between modes such as these are often the inspiration or fuel for our most important discoveries and meaning-making moments.

As creatives know so well, perched at those divides where hard choices must be made about whether we want to be in, out, or in-between, exist some of our most opportune moments for discovery, integration, and self-expression. Living inside the box may seem easier at times, and it’s nice to fit in when we don’t have to give up too much of ourselves to do so. It can be lonely to be on the outside of two places, looking in on both. But there is something to be said for the vantage point that exists at that edge between one reality and another.

As David Brooks so aptly describes in his NYT article “At the Edge of Inside”,
“now more than ever we need people who have the courage to live on the edge of inside”. And it does take courage to stand in that space between one thing and another, without giving in to the impulse to either act as if we know what we don’t, or to limit ourselves by what we do know.

Therapy can be an especially rich ground for finding an “edge of inside” that works for us. Therapy allows us to tap into childhood states of mind without allowing them to overtake us. It’s a place where regression can be fused with progression, where we can stand outside ourselves while looking in at the very same time, and where we can use the “protectedness” of the space to express realities that may need to be spoken but aren’t ready to be actualized.

We all need places where it’s safe to venture out while still maintaining our ties to the familiar; incubators for our best ideas and unknown selves to grow into what they need to be. Under the best of conditions, we find ourselves in facilitating environments and relationships that allow us to be in two places at once, and that nurture a sense of permission to move back and forth between a sense of belonging and a pushing of the limits. At other times, we need to create that space for ourselves. But no matter what the conditions around us are, frontier states leave all the possibilities open.