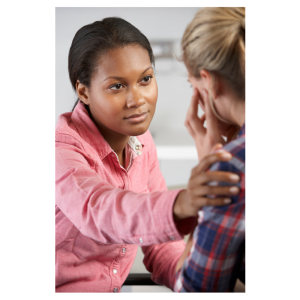 While most of us associate fears of contaminating others with physical illnesses like the chicken pox or the Zika virus, many people harbor similar kinds of fears about being emotionally damaged or infected in ways that can spread to others if not carefully contained within the self, kept secret, and controlled.

The idea of “emotional contagion” is not new to therapists who work with families, or even to social psychologists (such as Melissa Dahl, who talks about emotional contagion in the work setting in her article Is There an Antidote for Emotional Contagion?). Families high in emotional contagion are those in which emotions spread like fire, one person’s emotions triggering similar emotions in others and in the environment itself. One person panics, begins talking in a loud and anxious voice, and the next person becomes anxious in turn, etc. Moods spread from one person to the other, and anxious or angry feelings are often amplified and heightened by the response of the environment, rather than modulated by it.

But here I’m really talking about something else; a more pervasive feeling that some people carry around that their very “self” is bad, damaged, and destructive somehow. This is more of a false belief about one’s self rather than a behavioral pattern in the environment. There is a fear of being innately toxic to others, an inner shame, that leads to never-ending attempts to hide one’s true self from others, to hold feelings and emotions inside rather than expressing them, and to avoid potentially humiliating feelings of exposure. In essence, I’m referring to a disorder of hiding.

Sometimes early experiences of trauma or shame can lead to this feeling of toxicity, but other times it is simply experiences that one has that are secretly believed to be crazy or weird, such as obsessions, compulsions, panic attacks, etc.

The side effects of this kind of core belief are not simple. Holding everything inside and controlling what comes out in this way can lead to tension headaches, stomachaches, or other physical ills caused by holding everything in rather than letting things out and using others to help regulate states of tension, stress, and emotional reactivity.

Other potential negative effects are more mental in nature. You may find yourself overanalyzing everything, being kept up at night with racing thoughts, ruminating and having trouble making decisions; all effects of overusing the mind (in your somatopsychic economy) to try to contain everything all the time and to stop your inner experiences from leaking out.

And then there are the psychological costs, like feelings of being an impostor or a fraud because so much of your experience is hidden all the time, or fears of being spontaneous or speaking freely for fear of what might happen if something unexpected gets revealed.

Relationships can be affected too. While your partner may be longing for emotional connection and for the emotional openness it takes to have that connection, your fear of damaging the relationship if you really open up can frustrate the partner you want to please so much. In a funny way, it can make things even harder if your partner seems super contained themselves; in control and unflappable. I have worked with numerous couples where one partner was afraid to show his/her deepest vulnerabilities despite being with a partner who was kind, accepting, and non-judgmental- and who really wanted to know. It was the fact that the partner seemed so intact that actually reinforced the other’s sense of being the damaged one, and that made it so hard to share despite the partner’s love.

One of the reasons why therapy can help so much in this kind of situation is because of the “boundedness” of the therapy space. Therapy is a place where things can be talked about without the typical repercussions that might occur when talking in one’s real life; thoughts and feelings that are shared can stay safely in the room, and that which gets spilled out can be quarantined off from causing damage, spreading, and metastasizing beyond the therapy space. And this sense of safety is often enhanced by the notion that a therapist’s room is somehow equipped to deal with things like unruly emotions, painful confessions, fears and conflicts that feel too scary to talk about ordinarily for fear of burdening the other, rocking the boat, or losing the respect of someone you love.

Of course therapy is not the end point for the process of learning to see oneself as less toxic, to be less afraid to be open and free, and to share one’s vulnerabilities more comfortably in intimate settings where it’s safe to do so. (There are some relationships where showing our full selves is a bad idea!). But therapy is often a crucial beginning step; a first step in having some space that feels contained enough to handle that which is being held inside and where unhealthy beliefs about the self can finally be questioned and released.

If you found this post helpful, you may also be interested in this video on dismissive attachment:

“How to recognize dismissive attachment behaviors in yourself and others”